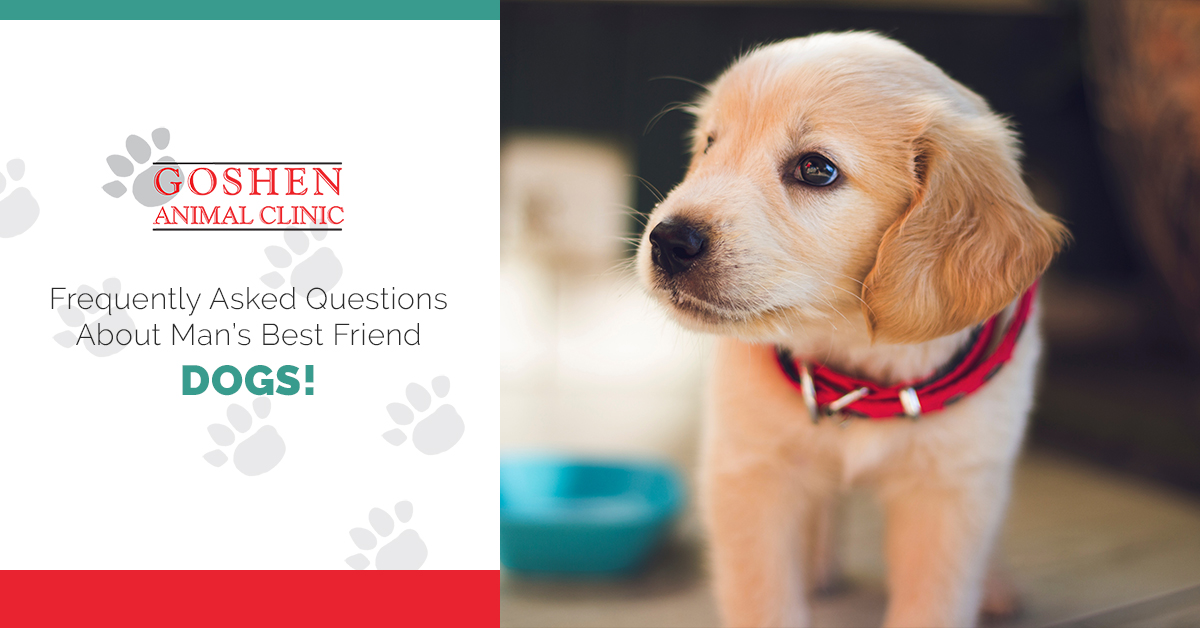 Most, if not all dog owners, have a fairly dynamic relationship with their dog. One moment, they’re calmly petting their dog and cuddling with them in the morning, and later that day, they might scold their dog for “going” inside of the house. As good as a “good boy” can be, dogs aren’t always perfect, but humans can still learn a lot from their ever-compassionate, unconditional love.

There’s no doubt that America is sensational about their pups. With the small business market being flooded in the past decade with dog toys, dog food, dog boarding, and other cater-to-your-dog companies, people’s canine obsession warrants the best possible veterinary care for dogs. At Goshen Animal Clinic, we’re proud to provide the highest levels of care for dogs in the form of comprehensive physical examinations, vaccinations, teeth cleaning, cold laser therapy, microchipping, and so much more!

As wonderful as owning a dog can be, you’ve probably noticed your dog do some pretty strange things. To help shed light on these canine mysteries, Goshen Animal Clinic offers a few of the most frequently asked questions about dogs.

Why Does My Dog Sniff Around For The Perfect Spot To Do Their Business?

If it only takes one time for you to notice that your dog probably takes a while to find the right spot to defecate outside. Why is this? While some dogs will find a spot fairly quickly, others take several minutes just to locate that perfect spot, often to the frustration of the owner.

There’s actually a four-part answer to this frequently asked question:

To begin, as weird as this sounds, pooping for dogs is a lot like how humans engage with social media in the sense that they’re checking each other’s status updates. When your dog is sniffing around, they’re “reading” what other dogs have posted beforehand.

Indeed, dogs are capable of knowing how many other dogs are in the area, in addition to whether or not a particular dog is a friend or an enemy, the sexual status of a dog, what they had for lunch that day, and when they last roamed that particular area. Amazing, right?

The defecating equation gets more complicated. Not unlike humans, dogs get performance anxiety when going to the bathroom in public places. Dogs are also said to develop preferences for defecating on differences, and that may help explain why it takes so long to find that ideal spot.

Now, as far as the magnetic pole situation goes, hear us out. You’ve probably noticed that your dog spins around in a circle before engaging in their “poop position.” This might be because dogs prefer to excrete by aligning their body along the North-South axis, i.e. the magnetic poles of the Earth. Take this information with a grain of salt because even though the above study presents evidence that suggests this is true, we’d still urge our readers to consider this information as speculative. Still, it’s interesting to consider this notion!

Why Does My Dog Make A Circling Motion Before Lying Down?

The answer to this question is a little more straightforward, but also goes back to the history of dogs. Once upon a time, prehistoric dogs didn’t have these plush, soft beds to lay down and sleep on. Back then, dogs literally had to make their own beds by almost nesting, or patting down some tall grass and vegetation in order to create a cushion between their bodies and the ground. Doing so was also an effective way to make sure that they weren’t sitting on any critters beneath them.

Though dogs have since been domesticated, of course, this instinct still seems to be carried in their DNA.

What Are The Most Common Health Problems For Dogs?

This page has all of the practical information that you’re looking for.

It’s worth noting that licking is a completely natural behavior for all dogs. With that being said, there are many reasons that dogs lick strange things, including your salty and sweaty skin after a workout. Often times, their licking boils down to anxiety or boredom, but here are several other reasons why your dog is utilizing their tongue so often:

At the end of the day, practically all dogs lick just for the sake of licking. Sometimes, there really isn’t an attributable reason for their licking tendencies.

Why Do Dogs Dig Holes And Bury Various Objects?

This answer can also be traced back to prehistoric dogs during a time when dogs (or packs of dogs) had to fend for their own survival. While your domesticated house dog simply looks to their food bowl for nourishment, early dogs had to cleverly bury their food in a location only they knew. The food had to be buried fairly deep into the earth, too, as dogs tend to have a very keen sense of smell — hence the rather large and deep holes that were dug up.

It’s clear that, like how dogs circle around before they lay down, this trait/instinct has been passed down over many generations. Since dogs don’t have to bury their food or treats just to survive and make sure that they can eat that day, they’ll take their toys or another random object and bury it.

Reference Our Pet Health Library To Learn More About Your Dog

Though the behavior of cats and dogs is more understood now than ever before, certain quirks and aspects of their behavior may never be understood. And hey, that’s part of what makes owning a pet so interesting! If you notice any particularly strange or erratic behavior, or it’s simply time for your dog’s checkup, make sure to get in touch with the team at Goshen Animal Clinic.

GREAT DEALS ON PET INSURANCE
Get an instant discount of up to 10% on pet insurance.