Microchipping Your Pet: Why You Should Do It, And How We Can Help 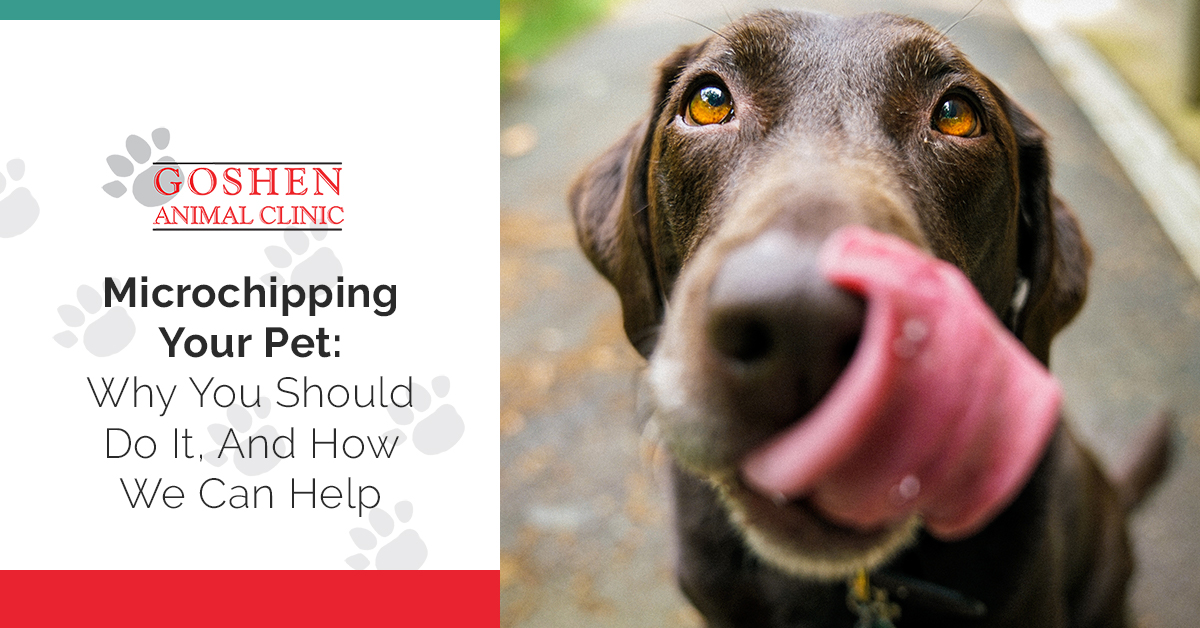 The number of lost or missing pets is unfortunate, and rather staggering. That’s a somber start to our blog post, but the following statistic illustrates what we’ll be discussing below: The American Humane Society estimates that more than 10 million cats or dogs are reported as “lost” every single year. This is particularly upsetting because, as of 2017, about 68 percent of all U.S. households had at least one cat or dog, meaning that millions of families have been affected by a pet who left unexpectedly.

Tracking Your Pet(s): Microchipping Can Help

Though there is no way to make sure that your dog doesn’t scamper off in the middle of the night or to trust that your outdoor cat will return back inside once again, there is a surefire way to track their whereabouts: by microchipping them. This painless and inexpensive process is an invaluable service that veterinarians around the world provide, and Goshen Animal Clinic is also proud to offer microchipping for pets in Gaithersburg and the surrounding area.

Microchipping for dogs and cats is just one of many specialized veterinary services that we offer at our animal clinic in Maryland, so feel free to reach out to us and inquire about how we can help your loved one stay safe and healthy.

How Do Pet Microchips Work?

As the name would imply, “microchips” are quite small in size — roughly comparable to a grain of rice. They’re harmlessly and painlessly implanted under your pet’s skin via a large bore needle in a similar manner to a vaccination. Each microchip that’s implanted contains a unique registration number linked to your (the owner’s) name and relevant contact information. This information is then added to a pet registry service provided by the manufacturer of the microchip.

This means that there is no universal microchip reader, and as such, it’s smart to chip your pet with a more common brand. Doing so means that the chip has a higher likelihood of being successfully scanned and read, wherever your pet ends up.

The Benefits Of Microchipping Your Cat Or Dog

Below, we’re going to cover a few specific reasons as to why you should microchip your pet. Let’s take a look.

Microchips Are Permanent — They Last A Lifetime

This one-time cost is one of the best investments that you can make into your pet, as well as your sense of wellbeing as an owner. Once the chip is implanted in your pet, you’ll never have to worry about it ever again. However, it’s generally recommended (depending on the type of chip) to have our veterinarians in Gaithersburg scan your pet’s chip about once a year to look for any potential malfunctions.

Should your cat or dog get lost and subsequently get their microchip successfully scanned, there will never be a question of who their owner is. Though sad but true, there are a number of stolen pet cases every year involving a dispute in ownership. Someone else claiming that your pet is theirs is, at the very least, infuriating, but a microchipped pet helps you circumvent this ownership dispute entirely.

You Can’t Always Rely On A Physical Name Tag

Your cat or dog should be wearing a collar, and on their collar should be a name tag or sorts with some basic contact information. That’s great, and quite useful in a number of situations, but it’s not as foolproof or reliable as a microchip that’s embedded under your pet’s skin.

Even if they’re trained to wear their collar without tampering with it (most pets are this way, after all), there’s still a chance that the tag can break off, fall, or even wear down over time to the point of illegibility.

Your Lost Pet Is More Likely To Be Reunited With You

Everyone loves a heartwarming story with a happy ending. Losing a pet and being unaware of their whereabouts is possibly the most stressful and disheartening experience a pet owner can endure, but losing a chipped pet means that they’re much more likely to return home. Studies suggest that microchipped cats are 10 times more likely to be reunited with their owners, and microchipped dogs are returned about 2.5 times more than their unchipped counterparts.

Though enhanced microchip features aren’t universal, certain manufacturers are adding features to their chips that enhance their functionality. Owners have the ability to program certain chips to open their dog door only when their chipped dog approaches, eliminating the possibility of a wild critter entering their home. Other chips will send your phone an alert when your pet goes astray.

When it comes down to being a responsible pet owner, there’s really no reason not to microchip your pet. This one-time investment in your peace of mind and the whereabouts of your pet will prove to be invaluable, and may mean the difference between a lost pet and a reunited friend.

To learn more about our pet microchipping services in Gaithersburg and beyond, please get in touch with Goshen Animal Clinic.

GREAT DEALS ON PET INSURANCE
Get an instant discount of up to 10% on pet insurance.